Within the EU H2020 REMAGHIC project, a process was developed by KU Leuven & TECNALIA to recover rare earths from CRT phosphor waste based on roasting and leaching with the green solvents acetic acid and methanesulphonic acid. The work is published in the Journal RSC Advances. (Leuven, 17/1/2019)

Cathode-ray tubes (CRTs) have widely been used in the past in television screens and computer monitors. Nowadays a large number of CRT devices is being discharged due to the fact that this technology is being replaced by LCDs, LCD/LEDs and plasma discharge displays. For this reason, it crucial to find proper treatment solutions for this type of e-waste.

One of the main components of a CRT is the panel glass, which is covered by a mixture of luminescent powders for producing images; in particular, the blue and green phosphors are based on zinc sulphide (ZnS:Ag for the blue phosphor and ZnS:Cu for the green phosphor), while the red phosphor is europium-doped yttrium oxysulfide (Y2O2S:Eu3+). This red phosphor is rich in the rare-earth elements (REEs) yttrium and europium and should be regarded as a potential secondary resource for these critical raw materials. The current treatment technologies for waste CRTs suffer from some disadvantages, such us the use of strong acids for the dissolution of the powder: due to the presence of sulfides, this leaching step cause the release of toxic H2S gas, unless an oxidizing agent is used.

In this paper, we propose an alternative approach for the recovery of yttrium and europium from waste CRT powder, which overcomes these issues by making use of an integrated process. The first step of the recovery process is a roasting step at relatively high temperature (850 ⁰C) to oxidise the zinc sulphide to zinc oxide. In the second step,  the green solvent acetic acid (CH3COOH, AcOH) is used to dissolve zinc oxide, giving access to the rare earth-rich fraction of the waste powder. Yttrium and europium are recovered from the leaching residue by a second leaching step with methanesulphonic acid (CH3SO3H, MSA), another green solvent known for its characteristics of biodegradability, thermal stability and low toxicity. Rare earths are finally precipitated with oxalic acid giving a mixed Y/Eu oxalate which is transformed, after calcination, in the corresponding mixed oxide. 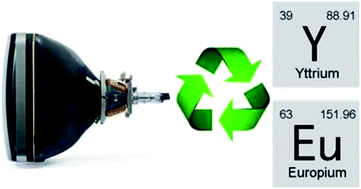 Graphical abstract: An integrated flow sheet based on roasting and leaching with organic acids is proposed for rare earths recovery from CRT phosphors.

Full reference of the paper

Federica Forte is postdoctoral research associate at KU Leuven, Department of Chemistry (SOLVOMET Group). Her main interests are in the field of hydrometallurgy, ionometallurgy and solvometallurgy. In particular, she has been involved in the development and optimisation of critical raw material (CRM) recovery processes from several types of residues such as WEEE and metallurgical slags. Read an interview with Federica here.

Come to the DEMETER Concluding Symposium in Leuven, Belgium, on 5-7 February 2019, which features a high-quality, “beyond-science-only” programme on rare-earth permanent-magnet motors and the e-mobility revolution. The three-day Symposium provides the floor to invited international experts from industry, academia and the European Commission, as well as the early-stage researchers from the ETN DEMETER project who will present their final results (watch the DEMETER video here). The Symposium includes two exciting panel discussions, which will stimulate a wider societal debate about the transition to a low-carbon mobility system, the requirement of critical metals (incl. rare earths), the Social License to Operate to mine and/or recycle critical metals, as well as the geopolitical aspects of rare earth sourcing. The Symposium is a co-organisation of DEMETER, SIM² KU Leuven and GloREIA.

The second panel discussion is entitled: “Are REEs still critical?”. Scope: Securing reliable and unhindered access to certain raw materials, such as REEs and cobalt, is a major concern for many countries. To address this challenge, the EC created a list of so-called Critical Raw Materials (CRMs) in 2011, with updates released in 2014 and 2017. In all three reports the REEs were ranked highest in terms of supply risk. The 2017 report labels the Light REEs as more critical than the Heavy REEs (in contrast to the 2014 report). This reflects key market trends such as the decline of fluorescent lamps (which consumed large volumes of the HREEs Eu, Tb and Y). As the demand for NdFeB magnets is expected to increase due to the use of these magnets in (H)EVs, e-bikes and wind turbines, some experts claim that Nd will be the only really critical REE in the future. In this panel discussion we want to look at this criticality question. Which REEs will be really critical in the future? How independent can the EU value chain become with respect to the Chinese REE value chain? Will there be new REE mines opened in the future and what will be the effect? How strongly can REE recycling contribute to the sourcing of REEs? What are the challenges for REE recycling?