Within the SOLCRIMET project (ERC Advanced Grant), researchers from the SOLVOMET Group have developed a solvometallurgical process for the separation of yttrium and europium, showing increased efficiency over conventional hydrometallurgical separation routes. The work has been published in the journal Separation and Purification Technology.

Rare-earth elements (REEs) are critical in the modern-day economy, being used in catalysts, hard disk drives, phosphorescent materials and are having a key function in upcoming green technologies and military applications. The growing demand for these critical elements has led to an increased  incentive to recycle REEs from waste fractions. End-of-life fluorescent lamp phosphors are an interesting source for REEs.

It is estimated that 25,000 tons of REEs will be available in the stockpiled lamp phosphors by 2020. The use of these fluorescent lamp phosphors is declining, leading to the need to separate the different rare earths in the phosphor powders. Researchers from the SOLVOMET group (KU Leuven) found that the economically interesting yttrium and europium, usually found together in the red lamp phosphor Y2O3:Eu3 (YOX), can be separated more efficiently using a solvometallurgical approach rather than the traditional hydrometallurgical approach. In solvometallurgy, the aqueous phase is replaced by an organic phase.

Separation of rare earths is challenging due to the chemical similarities of these elements. Traditionally, aqueous solvent extraction, employing an aqueous phase containing the original metals mixture and an organic phase containing the extractant, is used. Many extraction stages are necessary to separate the rare earths. In this study, the separation of Eu(III) and Y(III) ions from both aqueous and non-aqueous chloride media was investigated using the solvating extractant Cyanex 923.

When water was used, poor separation of both REEs was observed. However, by replacing water with ethylene glycol, selective extraction of Y(III) over Eu(III) was obtained. This result showed the potential of non-aqueous solvent extraction for rare-earth separation. 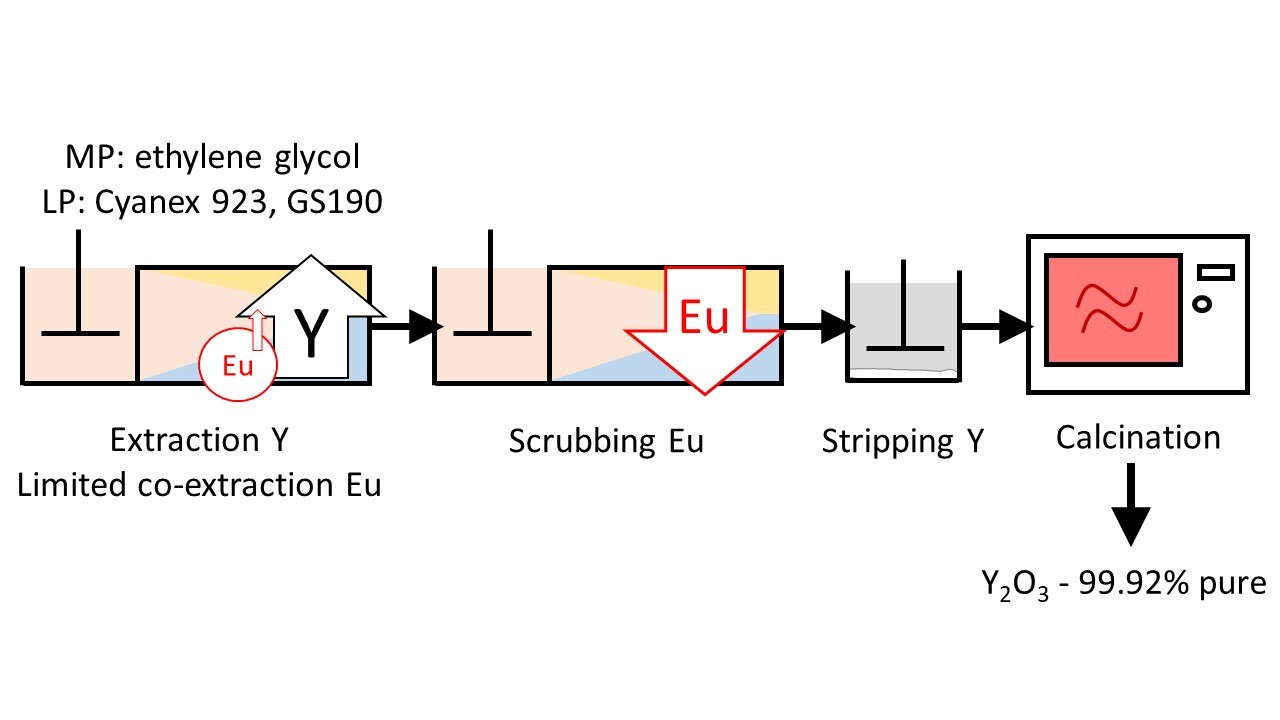 The increased selectivity obtained in non-aqueous solvent extraction implies that the solvent extraction process will be more efficient, in other words less stages will be needed. In this case, counter-current simulations showed that three extraction stages and two scrubbing stages would be sufficient to completely  separate Eu(III) and Y(III).

To prove the feasibility of the developed process, a test in continuous mode was performed using mini-pilot mixer-settlers, similar to a real industrial setup. This test proved to be successful, and thus indicated the viability of our solvometallurgical process. Besides the improved efficiency over aqueous solvent extraction, the non-aqueous approach also reduces the consumption of acids and bases.

[Featured image information: Author: Peggy Greb, US department of agriculture; This image is in the public domain because it contains materials that originally came from the Agricultural Research Service, the research agency of the United States Department of Agriculture.]