On October 16, 2017, The Word Magazine launched the “Leuven Hundreds” website, offering portraits of 100 local people who contribute towards making the city what it is today. The Word Magazine: “From artists and architects to producers and professors, these are the driving forces powering Leuven forward one ingenious initiative at a time.” SIM² KU Leuven is delighted to see that its day-to-day coordinator is nominated as one of them. You can read the interview with Peter Tom Jones here below, offering a totally different perspective of the role of SIM² KU Leuven in society.

Can you describe what you do?

My core job is being an Industrial Research Manager at KU Leuven, specifically in the domain of urban and landfill mining. I work with a large team of professors, research experts, post-doctorates and PhD students in a multitude of projects which try to make the world a better place. We focus strongly on the recycling and recovery of critical metals; like metals which are vital for developing clean energy and mobility solutions. We’re also working on technology development for cleaning up our waste legacy. In Flanders alone we have more than 2,000 landfills which contain waste that could be upcycled to valuable products.

Contributing to this transition towards a low-carbon, circular economy is what makes me get out of bed every morning. It’s also what links my core job with the my other, more “public” endeavours, such as writing books on climate change (policies), sustainability, and resilience; and giving lectures to a diversity of audiences. Last year my wife Vicky De Meyere and myself published a new edition of our book Terra Reversa – de transitie naar rechtvaardige duurzaamheid (“the transition to fair sustainability”) which offers ten reasons for environmental optimism. One such reason being that it’s present all over the world, with cities, including Leuven, pro-actively taking up the fight against climate change. As shown by the EU Covenant of Mayors, to which Leuven is also a signatory, local administrations are ideally placed to tackle climate issues in a holistic way. I’m happy that I’m able to do my bit in helping Leuven to achieve this.

How do you perceive Leuven?

For me, Leuven is a very atypical Belgian city, and the reason is clear: we have a disproportionate number of students and a very large community of people that either work for the various levels and departments of the University, or for companies that were spun out of the University. The result being that the average resident is extremely highly-educated and, typically, also rather well-off. This can sometimes create an artificial character, in stark contrast to a metropolitan city like Brussels, where the social conditions are obviously more complicated. In Leuven, the danger is in reaching a sort of “bimodal” division in the population: the well-educated, middle classes versus the less-affluent communities, suffering from the ever-increasing cost of living. One in three kids within the inner city of Leuven is born in poverty: this should definitely be a key issue which local politicians pay attention to.

What would you say is Leuven’s main appeal as a city? What gives it its edge?

Because of its rich university and cultural life, Leuven is a great place to live in. You’ll find the positive outcomes of globalisation here more than anywhere else. The University brings in a massive amount of different nationalities and cultures, enriching the city in multiple ways. As these people typically enjoy challenging yet secure and rewarding jobs, there are no intercultural issues to deal with here, in contrast with cities like Brussels or Antwerp where the flip side of the globalisation coin becomes more visible.

How has Leuven contributed to making you who you are today? What role has the city played in shaping your outlook and career?

When I was 18, I moved from a small village in the Province of Antwerp to Leuven for my studies. When I arrived, the world opened up to me completely – I got into contact with some very interesting people, and became involved in a host of civil society groups and political youth movements. We would debate, lecture, demonstrate and initiate direct actions. Leuven also brought me into contact with music genres that I never knew about before – like new wave and goth –, which we linked to our political activism. I got involved in the global justice movement, as well as ecological ones; and this later lead me to specialise in environmental engineering at KU Leuven. Through my further education as well as academic writing on the climate change issue, I eventually came to challenge, alongside like-minded comrades, Leuven’s ruling powers to take up the fight against climate change, and progress towards climate neutrality. This resulted in the erection of the non-profit Leuven Klimaatneutraal, a multi-actor organisation in which the City, research institutes, private companies and civil society groups join forces to move towards climate neutrality. A process which is in full flow at the moment.

On a personal level, what would you like to see more of in the city? What could it do better?

As I’ve said in many of my lectures and interviews about the Leuven Climate Neutral process, the Achilles’ heel of Leuven’s climate policies is its mobility. Frankly speaking, it’s a disaster. Despite all the efforts to move towards sustainable transport – including the new circulation plan in the city centre – there’s still so much work to do. Cars still rule, while cyclists are still considered a nuisance and need to fight to claim their position. We brand Leuven as a “bicycle city” while new parking garages in the inner-city continue to be conceived, and our bicycle infrastructure still lags way behind, especially when you compare it with leading bicycle cities like Copenhagen. The result is that transport-related CO2 emissions aren’t actually decreasing, and the city remains a notoriously dangerous place for cyclists. It’s a horror show, which we, like so many other young families, experience every day when we try to take our kids to school by bike in the centre of Leuven.

To you, what is the best way to spend a weekend in Leuven?

If you had asked me this question ten years ago, I certainly would have answered with Los Buenos: a unique and extremely vibrant pub-slash-youth centre on Parkstraat where left-wing, green, human rights and other activist groups congregated. Los Buenos was the central hub for so many positive things to have come out of Leuven – unfortunately, it no longer exists. Nevertheless, the Los Buenos spirit still lives on, and many of these people still meet each other today in various settings, to continue their major impact on both local and national politics.

A local legend, neighbourhood anecdote or urban myth that, to you, encapsulates the spirit of the city?

The only urban legend I can think about is that of Fonske, the statue in the centre of Leuven, who’s name refers to Fons Sapientiae, Latin for “Source of Wisdom”. The statue was erected in 1975 when the university celebrated its 550th birthday. It depicts this person reading a book while pouring wisdom in the form of water into his head. In times of climate change scepticism and the return of populist leaders all over the world, wisdom is still one of the best antidotes around. I hope our University can keep providing some of that – we’re going to need it in the 21st Century! 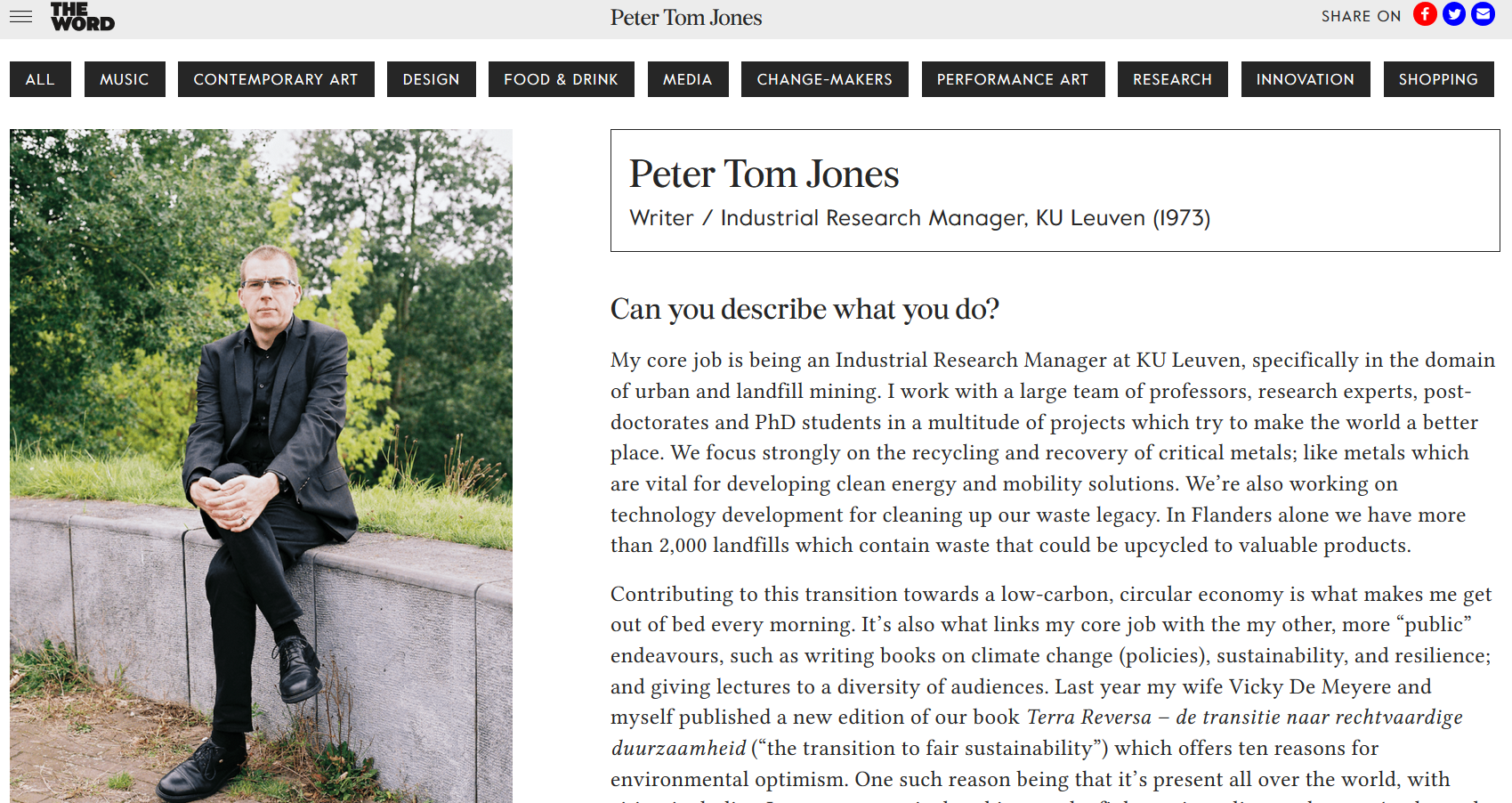