KU Leuven is currently by far the largest university in Belgium in terms of research funding and expenditure (EUR 455.1 million in 2015), and is a charter member of LERU. KU Leuven conducts fundamental and applied research in all academic disciplines with a clear international orientation. In the Times Higher Education ranking KU Leuven is ranked as the 12th European university, while in the Reuters Top 100 of the World’s most innovative institutions, KU Leuven is listed as the first European university. Leuven participates in over 540 highly competitive European research projects (FP7, 2007-2013), ranking sixth in the league of HES institutions participating in FP7. In Horizon 2020, KU Leuven currently has been approved more than 210 projects. KU Leuven takes up the 9th place of European institutions hosting ERC grants (as first legal signatories of the grant agreement). To date, the 93 ERC Grantees (including affiliates with VIB and IMEC) in our midst confirm that KU Leuven is a breeding ground (48 Starting Grants) and attractive destination for the world’s best researchers. The success in the FP7 and Horizon 2020 Marie Sklodowska Curie Actions is a manifestation of the three pillars of KU Leuven: research, education and service to society. In our 199 Actions, of which 96 Initial/European Training Networks, hundreds of young researchers have been trained through research and have acquired the necessary skills to transfer their knowledge into the world outside academia. 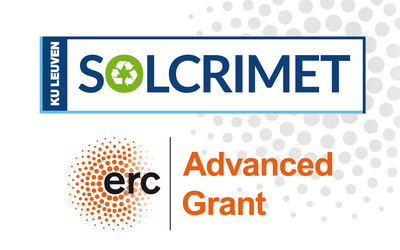 SOLCRIMET’s aim is to successfully apply a ground-breaking metallurgical approach – solvometallurgy – to the extraction of specific critical metals, i.e. rare earths, tantalum, niobium, cobalt, indium, gallium, germanium and antimony, which are key enablers of the required transition to a low-carbon, circular economy.

MICRODISCO aims to provide fundamental understanding of ultrasound resonance modes and targets a theoretical tool for their prediction, leading to innovative and intensified electro- and photochemical reactors promoting green and sustainable chemistry.

As a leading partner in both EIT RawMaterials, CR³ and the European Enhanced Landfill Mining Consortium (EURELCO: www.eurelco.org), SIM² KU Leuven has key assets to participate in EU projects. These flagship domains are:

To involve SIM² KU Leuven in one of your project proposals, contact: