This new RSC Advances paper by Dženita Avdibegović,  Mercedes Regadío  and  Koen Binnemans (SIM² KU Leuven & SOLVOMET) demonstrates the effectiveness of a novel supported ionic liquid phase (SILP) for the uptake of REEs (Sc, Y, Nd, Dy) in the presence of base elements (Ca, Al, Fe) from BR leachates. The REEs were purified from the base elements and separated into three sub-groups (scandium, light REEs and heavy REEs) by an optimised elution profile with H3PO4 and HNO3 in a single chromatographic separation step. The paper was produced in the context of the ETN REDMUD project. (Leuven, 30-3-2018)

The rare-earth elements (REEs) are nowadays considered as strategic elements because of their importance for modern technology and clean-tech applications, but there are only few mineable REE deposits, mainly located in China and the United States. This scarcity of naturally occurring REEs deposits presents an opportunity for utilisation of secondary resources. In fact, in a quest for an alternative source of REEs, bauxite residue (BR), a by-product of alumina industry, has recently drawn a lot of research attention. BR contains substantial concentrations of REEs but their recovery is a challenge. Acidic BR leachates typically comprise thousand times higher concentrations of base elements than those of the REEs. Thus, sorbents that are highly selective for the REEs over the base elements are required for the separation. Supported ionic liquid phases (SILPs) are sorbents that comprise ionic liquids (ILs, compounds that consist entirely of ions), integrated on a solid support, combining the characteristics of the two materials in one. ILs can easily be tuned for the selective uptake of metals, and solid supports provide large surface areas; both desirable characteristics for liquid-solid extraction applications. 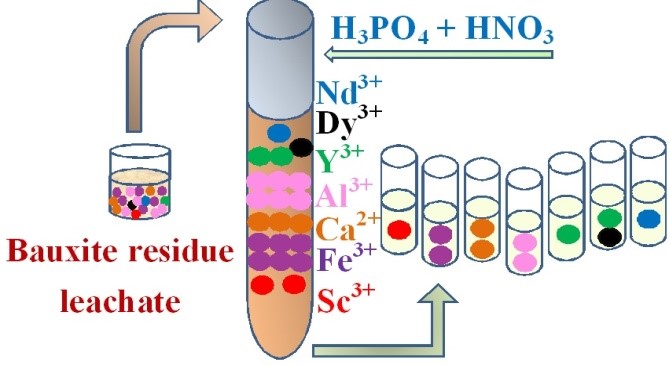 In this paper (produced in the framework of the REDMUD project) the SILP betainium sulfonyl(trifluoromethanesulfonylimide) poly(styrene-co-divinylbenzene) [Hbet-STFSI-PS-DVB] was evaluated for the uptake of REEs (Sc, Y, Nd, Dy) in the presence of base elements (Ca, Al, Fe) from BR leachates. Initially, breakthrough curves from synthetic acidic nitrate and sulfate media were investigated, as both HNO3 and H2SO4 are commonly used for leaching of BR. The SILP exhibited a superior affinity for REEs in both media, except in the case of Sc(III) from the sulfate feed, due to its interactions with the sulfate ligands. Fast adsorption kinetics indicated a potential applicability of the SILP for a large-scale process. The separation of REEs into three groups (Sc, light REEs and heavy REEs) was achieved by an optimised 3-step pH gradient elution with H3PO4 and HNO3. The elution followed the sequence: Sc(III) > Fe(III) > Ca(II) > Al(III) > Dy(III) ≈ Y(III) > Nd(III). Moreover, the recovery and separation of REEs was tested with a real HNO3 BR leachate. The recovery rates of the trace amounts of REEs from the real leachates were remarkably high (72 ‒ 100%) via a simple chromatography separation. The REEs were enriched and purified from the base elements. The recovery and purification results are even more valuable when considering the fact that there was no optimisation of the leaching process, neither pretreatments to remove interfering major elements, nor chelating agents to adsorb only the elements of interest. Furthermore, the SILP showed high reusability and stability without decreasing the recovery efficiencies. This novel chromatographic method is promising for efficient separation and purification of REEs.

Dzenita Avdibegovic graduated in Chemical Engineering (BEng) in 2011 and (MEng) in 2012 at the University of Sarajevo (Bosnia and Herzegovina). Curious and eager to gain new knowledge and experience, she started her PhD in 2015 at KU Leuven, where she enjoys her time along with many international students and KU Leuven staff.

The research leading to these results has received funding from the European Community’s Horizon 2020 Programme under Grant Agreement number 636876 (REDMUD–H2020-MSCA-ITN-2014). Project website: etn.redmud.org.