Lead was selectively leached from the residues (matte and slag) of a secondary lead smelter using EDTA as lixiviant. The residues were composed mainly of iron (34–66 wt%) and lead (7–11 wt%). 100% of the lead was leached with less than 2% of the iron co-dissolved, using a multi-step leaching process where the leaching residues were contacted three times by a fresh EDTA solution. The lead in the leach liquor was precipitated as lead sulfide using adding ammonium sulfide. The recovered EDTA was successfully reused twice for leaching without significant changes in leaching yields. This SOLVOMET/SIM² KU Leuven work was published in the open access journal RSC Advances of the Royal Society of Chemistry.

Scope of the manuscript

A total of 11.9 million tonnes of lead metal was produced globally in 2019, and 61% of that amount was produced by recycling of lead-containing scrap by secondary lead smelters.

The secondary lead smelters produce metallic lead as their main product; however, also a large amount of by-products such as matte, slag and dross are generated. About 200,000 tonnes of lead-rich residues (matte and slag) are being produced yearly in Europe alone during this smelting process.

These residues are composed mostly of iron (30–70%) and lead (6–10%), but some amounts of tin, antimony, nickel and zinc are present as well.

Beside containing valuable metals, the residues posed an environmental concern due to the heavy metals present in it. By selectively recovering lead from the residues, not only a valuable metal is obtained from a waste but also a more clean iron-rich leach residue is generated.

EDTA was used for the leaching of lead from residues (matte and slag) of a secondary lead smelter plant. The residues were composed mainly of iron (34–66%) and lead (7–11%). The use of EDTA in leaching metals from matte and slag resulted in a highly selective leaching of lead over iron: only about 1% of iron was co-dissolved alongside about 80% of the lead.

Having a Pregnant Leach Solution with lead as a major component reduces the cost of downstream processes for obtaining high purity lead and, at the same time, less lead was left in the original residue, which reduces its pollution potential when disposed of.

The poor leaching of iron by EDTA can be attributed to the low solubility of crystalline iron oxides, iron sulphide and iron silicates, which were the major iron phases in the residues.

The leaching efficiency of lead increased to 100% when the leaching residues were contacted three times by a fresh EDTA solution. The EDTA in the PLS was recovered by precipitation of iron and lead by sodium hydroxide and ammonium sulphide, respectively.

The recycled EDTA was successfully reused for leaching of fresh residues, making the process cheaper and environmentally friendlier.

The authors of this work acknowledge the Strategic Initiative Materials in Flanders (SIM) for the financial support (SBO-SMART: Sustainable Metal Extraction from Tailings) with grant no. HBC.2016.0456. The author also wish to acknowledge funding from European Commission's H2020 – Marie Sklodowska Curie Actions (MSCA) – Innovative Training Networks within the SOCRATES project under the grant agreement no. 721385 (Project website: http://etn-socrates.eu). This work reflects only the author's view, exempting the community from any liability. 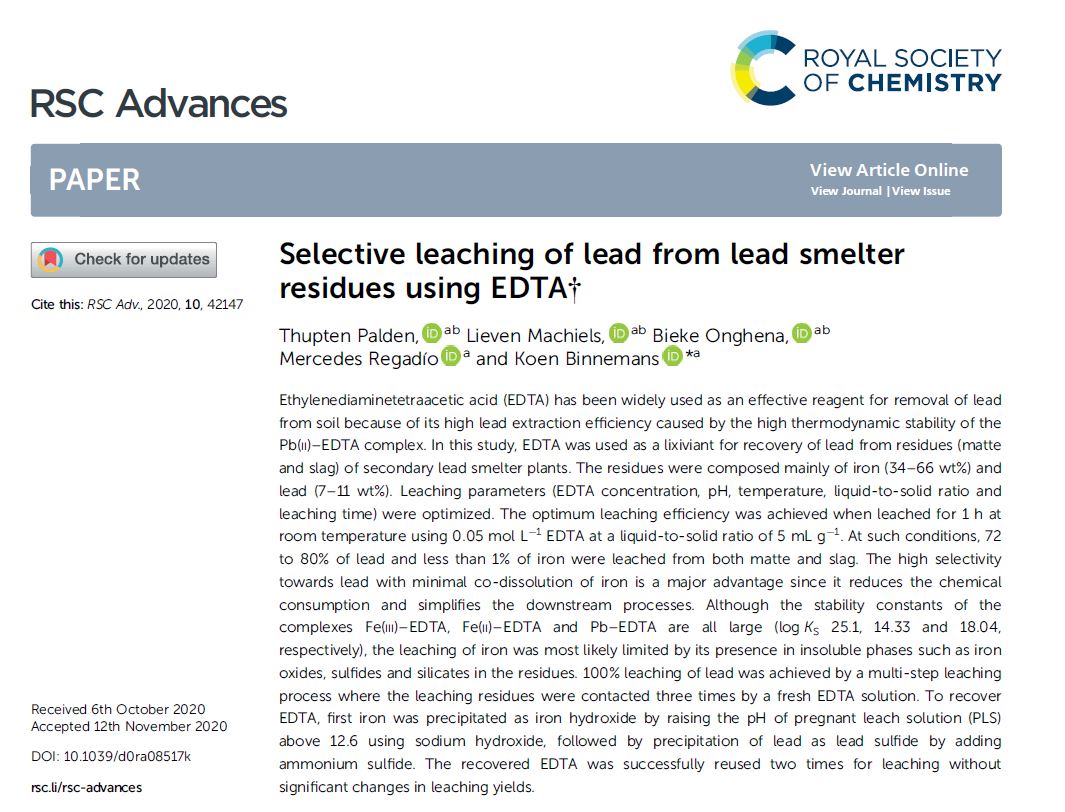