In the context of the EU Horizon 2020 MSCA-ETN REDMUD project, an international team of  researchers have published one of the most detailed ever characterisation studies of the occurrence of scandium in Greek bauxite and bauxite residue, in view of the development of efficient scandium extraction recovery techniques (Leuven, 22-5-2018)

Bauxite and bauxite residue, a by-product of alumina production, were studied using a combination of microanalytical techniques — electron microprobe wavelength dispersive spectrometry, laser ablation inductively coupled plasma mass spectrometry and μ-Raman spectroscopy. The aim of the work was to reveal the modes of occurrence of scandium (Sc). The motivation behind this effort was to provide mineralogical insight for the support of ongoing development of Sc extraction technologies from bauxite residue. In the analyzed bauxites and residue, Sc is mainly hosted in hematite, where Sc3+ probably substitutes Fe3+. The average concentration of Sc in the hematite matrix of bauxite is about 200 mg/kg, while in the bulk sample it ranges from 42 to 53 mg/kg Sc. In bauxite residue, the average concentration of Sc in hematite matrix is about 170 mg/kg, and in the bulk sample it is 98 mg/kg. In bauxite residue, goethite was also identified to host Sc with a concentration of about two times more than in hematite — 330 mg/kg. In bauxite residue, hematite, goethite and zircon host respectively 55 ± 20%, 25 ± 20% and 10 ± 5% of the total Sc. The effect of the Bayer process to the modes of occurrences of Sc is minor. The secondary bauxite residue minerals formed during bauxite processing do not capture any or capture very low amounts of Sc. New evidences of Sc leaching behavior from bauxite residue show that Sc is first released from goethite, then from hematite and the unrecovered proportion of Sc is likely associated with zircon.

We thank Apostolos Kourtis from the National Technical University of Athens for his help with Raman microscopy. We are grateful for the help of György Bánvölgyi and Ken Evans who provided numerous comments and helped to correct the manuscript. Two anonymous reviewers are acknowledged for helping to improve the manuscript. The research leading to these results has received funding from the European Community’s Horizon 2020 Programme (H2020/2014–2019) under Grant Agreement no. 636876 (MSCA-ETN REDMUD). This publication reflects only the authors’ views, exempting the Community from any liability. Project website: http://www.etn.redmud.org. Conflicts of interest: none.

In search of more info on bauxite residue valorisation? 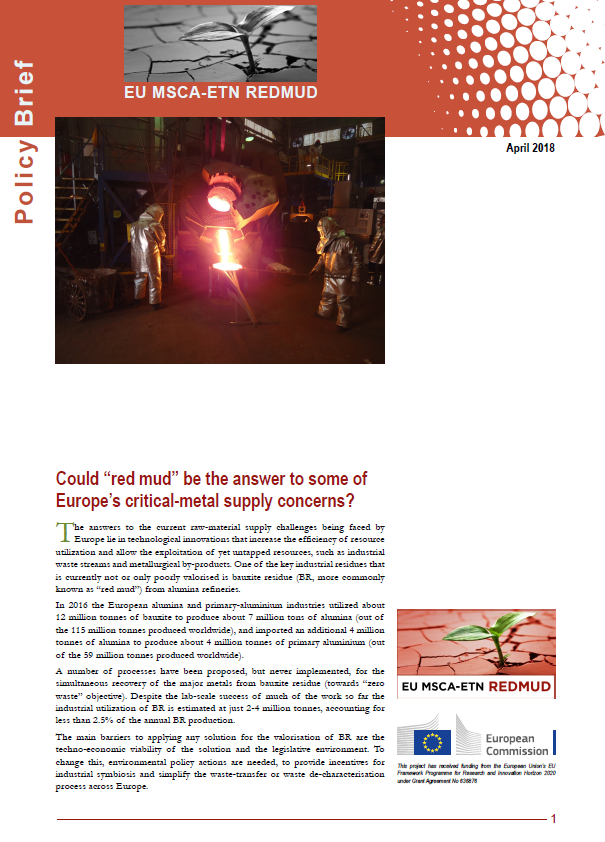 Read the ETN REDMUD Policy Brief, which provides a comprehenisve overview on EU-related research in the field. The answers to the current raw-material supply challenges being faced by Europe lie in technological innovations that increase the efficiency of resource utilisation and allow the exploitation of yet untapped resources, such as industrial waste streams and metallurgical by-products. One of the key industrial residues that is currently not or only poorly valorised is bauxite residue (BR, more commonly known as “red mud”) from alumina refineries. In 2016 the European alumina and primary-aluminium industries utilised about 12 million tonnes of bauxite to produce about 7 million tons of alumina (out of the 115 million tonnes produced worldwide), and imported an additional 4 million tonnes of alumina to produce about 4 million tonnes of primary aluminium (out of the 59 million tonnes produced worldwide). A number of processes have been proposed, but never implemented, for the simultaneous recovery of the major metals from bauxite residue (towards “zero waste” objective). Despite the lab-scale success of much of the work so far the industrial utilization of BR is estimated at just 2-4 million tonnes, accounting for less than 2.5% of the annual BR production. The main barriers to applying any solution for the valorisation of BR are the techno-economic viability of the solution and the legislative environment. To change this, environmental policy actions are needed, to provide incentives for industrial symbiosis and simplify the waste-transfer or waste de-characterisation process across Europe. Download REDMUD Brief April 2016 here.