SIM² KU Leuven researchers, together with colleagues from Ghent and Cranfield University, reconstructed the exploitation of antimony 4,000 years back, by developing a new approach to sourcing ancient mines using Sb isotope ratios. While Sb2O3 is a crucial commodity today (e.g. produced by Beerse-based company Campine), also in ancient times antimony was an important ‘industrial’ product. In ancient glassmaking, stibnite ore was the only source that could provide the very pure Sb needed to opacify the earliest vitreous materials. Sb isotope analysis allowed Late Bronze Age Egyptian and Mesopotamian glass vessels and Caucasian Sb metal beads to be compared to possible ancient ore sources. The only known match for the isotopic composition of the glass is the stibnite ore from the Racha-Lechkumi district in the Caucasus (present-day Georgia). The authors thus propose that stibnite extraction, with the Caucasus as major supplier to the Late Bronze Age world, was driven by the demand for glass. It hypothesized that this mining was associated with the extraction of precious metals, gold in particular. Conversely, for metallurgical applications, also complex polymetallic ores were extracted. This work was supported by FWO and KU Leuven, and published in Journal of Archaeological Science.

A history of antimony use

Antimony as an element has seen a long history of use, first in metallurgy, and subsequently and more importantly in the earliest vitreous materials industries.

The oldest ‘natural’ (non-intentional) Cu alloys derived from smelting complex ores, containing variable levels of arsenic and antimony up to 20% by weight, have been found in the southern Levant and central Italy, respectively from the middle of the 5th and the early 4th millennium BCE onwards.

Also metallic Sb is known from the latter location, though the exact nature of the raw materials used, remains unknown. In the Caucasus, similar materials were made at the end of the early Bronze Age, and became widespread in the region from the middle of the 2nd millennium BCE onwards.

The widespread adoption of glass as a man-made material started during the 16th century BCE, and factory-based glassmaking has been placed in Mesopotamia and Egypt. Sb minerals were a major raw material for this craft, used as an opacifier combined with copper (Cu) or cobalt (Co) to make opaque blue glasses, or as calcium (Ca) and lead (Pb) antimonate for the production of opaque white (Ca2Sb2O7 or CaSb2O6) and opaque yellow (Pb2Sb2O7) glass.

Early glass was an elite material, used as a substitute for semi-precious stone such as lapis and turquoise, whereas the earliest yellow glass may have been equivalent in use to gold (Au). Magic and ritual were always closely associated with the first glassmaking.

Raw glass was exchanged very early on, as can be seen from e.g. the Bronze age Ulu Burun shipwreck carrying ingots of blue glass, and the Amarna letters, a diplomatic archive of the House of the King’s correspondence, including requests for glass. In this way, Sb spread throughout the known world from the Chalcolithic onward.

Despite this ubiquitous use in many early pyrotechnologies, antimony ore mining has only rarely been studied, and questions concerning raw material provenance and materials exchange have not been satisfactorily answered.

To provenance the antimony ores used in ancient materials, several ore types with archaeological relevance were geologically studied and Sb isotope ratio analysis was developed as a method to be able to compare ore to artefact.

The range of fractionation appears to be around 123Δ Sb =  0.25‰, but needs to be confirmed. Since the induced isotopic shifts can be explained by redox processes,  isotopic signatures can be corrected for fractionation and used as a fingerprint to provenance antimony ore sources.

For glassmaking, stibnite was the only available source that could provide the very pure Sb evident from trace element analyses of the earliest glass, whereas complex polymetallic ores were also suitable for the metallurgical applications. First Sb isotope analysis has allowed Late Bronze Age Egyptian and Mesopotamian glass vessels and Caucasian Sb metallic beads to be compared to the possible ancient ore sources.

The only known matches for the isotopic composition of the glass are stibnite ores from the Racha-Lechkumi district in the Caucasus (present-day Georgia), near the Zopkhito Au-Sb deposits, mined from the 17th century BCE, just before the start of widespread glass production.

Conversely, the metallic Sb beads represent several compositional groups, only one of which matches the Racha-Lechkumi stibnite. Others, with associated diverse trace element associations, originate from other, more Cu-rich Sb ores. 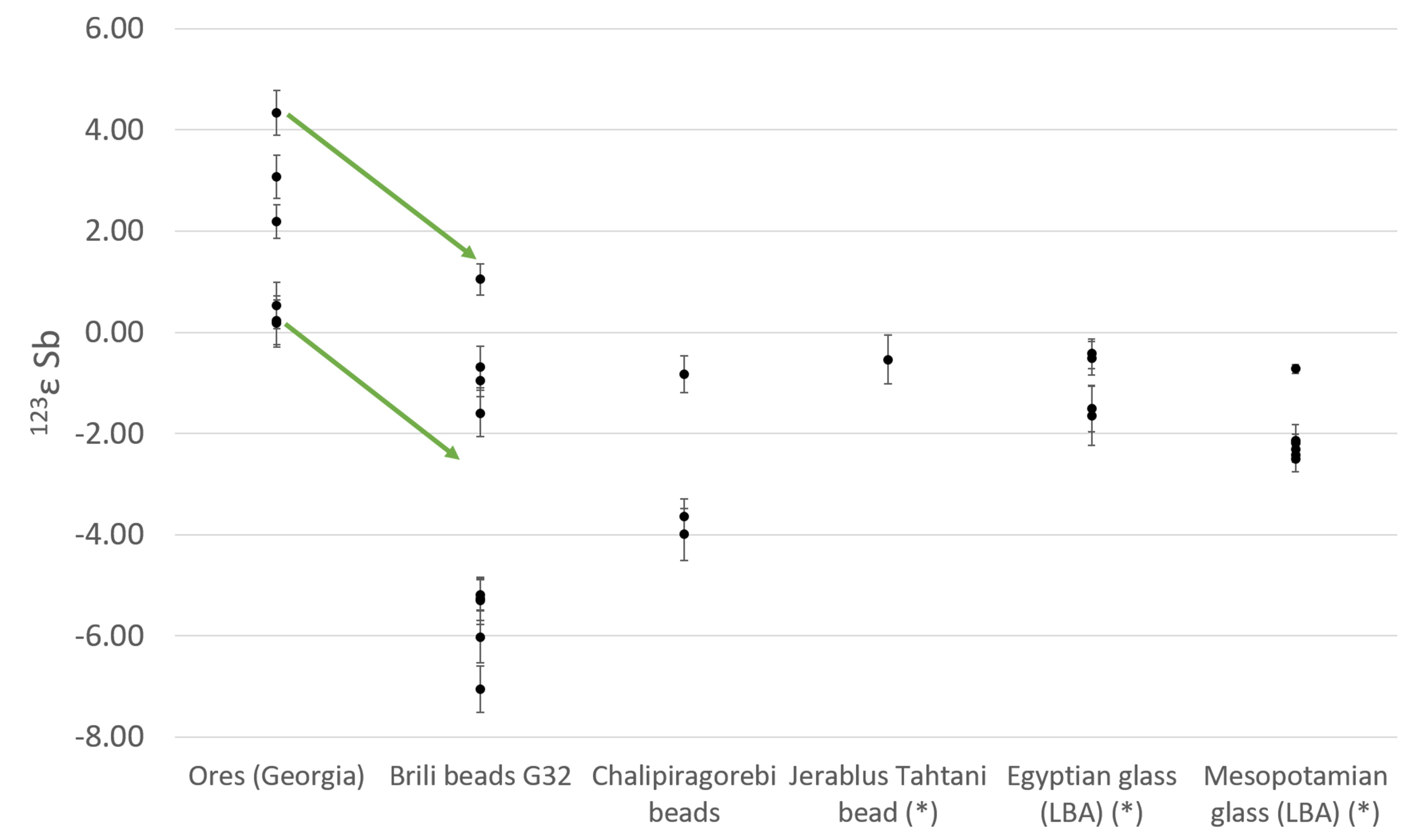 Fig. 1 Sb isotopic composition of Caucasian stibnite from the Racha-Lechkumi region and Sb metal beads from Brili and Chalipiragorebi, compared to previously analysed Egyptian and Mesopotamian Late Bronze Age glasses and Sb slag. The arrows show the 3-epsilon correction for fractionation between the unprocessed ores and the archaeological artefacts.

Remarkably, the Sb deposits in the aforementioned mines are all associated with Au mineralisation. Moreover, gold extraction in the region, from Sakdrisi, is known from the first half of the 4th millennium BCE onwards. The geology of the Caucasian antimony deposits is not the only connection between the earliest glass and gold. The first white and yellow glass, made with antimonate opacifiers, was applied to the edges of the lids and feet of glass vessels, in the same manner as Au leaf.

Stibnite and Au in their mineral/native forms are remarkably similar in occurrence. Both are heavy minerals that geologically co-occur in ore genesis, and can also co-occur in placer deposits. Density separation could be applied to both Au and stibnite, and although this would produce clearly different resources, they can be won in a similar manner.

In this case, co-occurrence could therefore signify the possibility of co-processing. Moreover, most metallic objects composed of pure Sb are ornamental (e.g. the beads) and have the same functionality as gold, in contrast to the Cu-alloys rich in Sb.

The authors thus propose that stibnite extraction, with the Caucasus as major supplier to the Late Bronze Age world, was driven by the demand for glass. Stibnite production was separated from copper metallurgy, but associated with the mining of precious metals.

This research project has received funding from the Flemish Research Foundation (FWO Vlaanderen) [grant no. G0C4315N] and the KU Leuven Special Research Fund [grant no. C14/19/060] and benefited greatly from a Visiting Fellowship by PDG at All Souls College, Oxford.

Want to know more about the work of Prof. Patrick Degryse?

Patrick Degryse is professor at the Department of Earth and Environmental Sciences at the KU Leuven and at the faculty of Archaeology at Leiden University. He is head of the Archaeometry research unit and a formal Member of the KU Leuven Institute for Sustainable Metals and Minerals.

Find out more about his work in this SIM² KU Leuven interview here.