A team of SIM² researchers (SOLVOMET & SURF Groups) have succeeded in electrodepositing the rare-earth elements neodymium and dysprosium at ambient temperatures from organic electrolytes. The electrolytes consist of a redox-active rare-earth borohydride complex, dissolved in an ether solvent. Elemental analysis confirmed the high content of both REEs in the deposits and X-ray photoelectron spectroscopy analysis confirmed that they are in the metallic form. The work was published in the journal Physical Chemistry Chemical Physics. Given the magnitude of the results obtained in this (open access) paper, it was offered to appear on the front cover of the April 21 journal edition (design by Clio Deferm). The work was performed within the framework of Prof. Koen Binnemans’ ERC Grant SOLCRIMET.

Electrowinning is widely regarded as a clean method for the recovery of elements in the metallic form. An electric current is used for the reduction of the metal ions, as opposed to a chemical reducing agent, which imposes additional costs and generates waste products.

However, the highly reactive and strongly reducing nature of metallic REEs imposes many constraints on the type of electrolytes that can be used for this purpose. Currently, the state-of-the-art technology for REE electrowinning are molten salt electrolytes, which have a very high operating temperature (> 500 °C) and are corrosive to the infrastructure.

The ionic liquid technology has been explored as an alternative with lower operating temperatures, but the high cost of the electrolytes severely limits the possibility for upscaling.

Organic electrolytes, which consist of a supporting electrolyte salt dissolved in an organic solvent, could be a promising alternative system for electrodeposition of REEs at much lower temperatures, while also avoiding or limiting the use of expensive ILs or salts.

However, they should be sufficiently (electro)chemically stable and conductive to compete with molten salts. Many organic solvents and salts are unsuitable, because they are reactive towards metallic rare-earths, resulting in the rapid formation of insulating surface films which block the current flow and further reduction of the REE cations.

Recent advancements in the field of magnesium and calcium metal anodes for rechargeable batteries describe the successful electrodeposition of both metals from organic electrolytes based on borohydride (M(BH4)2) salts and ether solvents.

Because rare-earths are also highly reactive multivalent metals with similar standard reduction potentials, these reports became the inspiration for the development of a new type of organic electrolytes for REE electrowinning, with an initial focus on neodymium and dysprosium.

The electrolytes that are reported in this paper consist of a redox-active anionic borohydride complex with the general structure [Ln(BH4)4]–, dissolved in the ether solvent 1,2-dimethoxyethane. This complex is formed by the reaction of Ln(Tf2N)3 (Tf2N– = bis(trifluoromethylsulfonyl)imide), and a commercially available borohydride salt (NaBH4, LiBH4, TBABH4) in a 1:4 ratio. 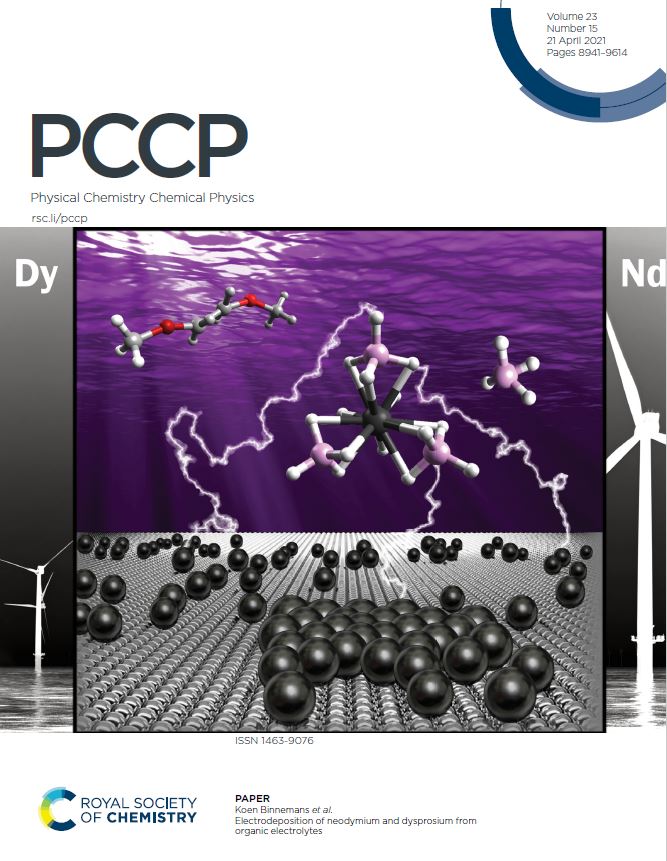 It was found that electrodeposition at high current density was only possible in electrolytes with this specific ratio. Chronoamperometry experiments resulted in black deposits that were sensitive to oxidation. Energy-dispersive X-ray (EDX) analysis of the deposits after exposure to air confirmed that the lanthanide oxides (Ln2O3) were the main components, and X-ray photoelectron spectroscopy (XPS) of fresh deposits gave preliminary evidence that the lanthanides were in the metallic form, notwithstanding the presence of an oxidized surface layer.

Finding a low-temperature-operable electrolyte system for electrowinning of pure (non-alloyed) REEs has been notoriously difficult due to their high reactivity. The authors of this paper are convinced that this new borohydride-based system is an important step forward in the right direction, and that it can still be improved upon.

The research was supported by the European Research Council (ERC) under the European Union's Horizon 2020 Research and Innovation Programme: Grant Agreement 694078 – Solvometallurgy for critical metals (SOLCRIMET). Bastiaan Opperdoes is acknowledged for his assistance with the load-lock transport chamber and inserting the XPS samples in the ultra-high-vacuum system. Clio Deferm is kindly acknowledged for designing the cover image accompanying the paper.