SIM² KU Leuven geologists Fernando Araujo, Niels Hulsbosch, and Philippe Muchez, describe the occurrence of niobium and tantalum oxide minerals associated with complex phosphate mineral assemblages in phosphorus-rich pegmatites, and evaluate the settings for the oxide mineral formation. The work is published in the American Mineralogist: International Journal of Earth and Planetary Materials.

Pegmatites as a source of critical metals

Pegmatites are one of the frontiers for the exploration of critical raw materials. These rocks have always been important sources of industrial minerals (quartz, feldspar, and micas) and gemstones (beryl, topaz, and tourmaline), but are increasingly relevant as sources of strategic metals (Li, Ta, Sn, Nb, and Cs), which are required to the technological development of our society and the transition to climate neutrality.

The crystallisation of ore minerals composed of strategic metals, hereafter referenced as niobium and tantalum oxide minerals (NTO), is commonly related to rare-element granitic pegmatites, a subset of the pegmatite rock group.

Rare-element pegmatites are interpreted as the solidification product of residual melts, that is, they represent the last portion of liquids concentrated from larger magmatic systems. They show increased content of incompatible elements, elements that tend to accumulate in the liquid during solidification (such as P, B, Li, Rb, Cs, F, etc.).

The high amount of these elements significantly affect the physical-chemical properties of the magma (density, viscosity, melting point, water solubility, etc.) and experimental studies show that this strongly influences the mineralisation of NTO.

However, the ore mineralisation stages in natural rocks is still highly debated from a pure magmatic origin (concentration in the melt until saturation is reached) to a mostly hydrothermal origin (metal remobilization by high-temperature aqueous fluids after crystallisation), or somewhere in-between with influence of both magma and fluid in the mineralisation.

To help with the current discussion over the NTO mineralisation stage, we have investigated samples from the Buranga pegmatite, a P-rich rare-element granitic pegmatite hosting Nb-Ta-oxide minerals, located in western Rwanda.

Due to the unusually rich and complex mineralogy of the Buranga pegmatite (check the location’s Mindat page for the complete list of minerals – hyperlink: https://www.mindat.org/loc-2824.html) innovative micro-analytical techniques such as Raman spectrometry are required to fully characterise the mineral assemblage associate with the NTO mineralisation.

Textural and chemical analyses suggest that CGM mineralisation represents local disequilibrium processes, due to the destabilisation of magmatic phosphates by the interaction with high-temperature aqueous fluids in the fluid-melt-crystal system.

These results support an in-between model, where strategic metals (niobium and tantalum) are concentrated by the melt, during the crystallisation, until a high-temperature aqueous fluid is exsolved. This free fluid reacts with the previously crystallised phosphate minerals and the Nb-Ta-bearing melt to precipitate niobium and tantalum oxide minerals (see the picture below for a visual representation of the model).

Information about the publication

The work entitled “Paragenesis and precipitation stages of Nb-Ta-oxide minerals in phosphorus-rich rare-element pegmatites (Buranga dike, Rwanda)” was accepted for publication in the American Mineralogist. It is currently in press, but can be accessed in the journal server (hyperlink: https://doi.org/10.2138/am-2022-8201). Acknowledgement are included therein. 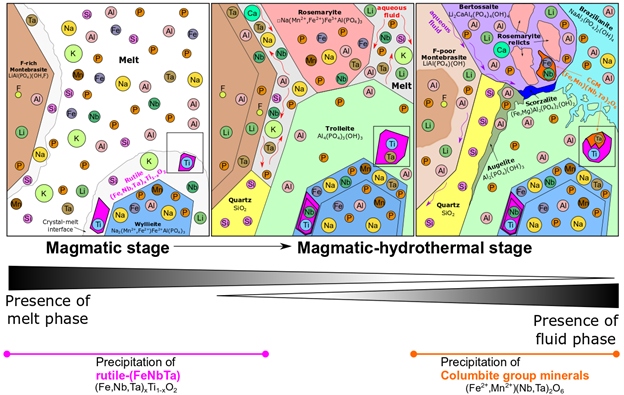 Figure: Simplified Nb and Ta mineralisation model for phosphorus-rich pegmatites. The initial availability of chemical elements is controlled by the crystallisation of phosphate minerals. Firstly, rutile, the only magmatic Nb-Ta-rich mineral, precipitates at the crystal-melt interface of magmatic phosphates. Secondly, columbite-group minerals precipitate when Fe and Mn are released back into the Nb-Ta-bearing residual melt due to dissolution of the primary phases by the exsolved high-temperature aqueous fluid (red arrows) at the magmatic-hydrothermal stage. Elements dissolved in the melt or fixed in a crystal structure are marked by coloured circles. Undulated arrows represent the magmatic-hydrothermal fluid circulating in the system. Below are the indications of presence of the melt and fluid phases and the ranges for NTO mineralisation. This image is modified from the original research article. 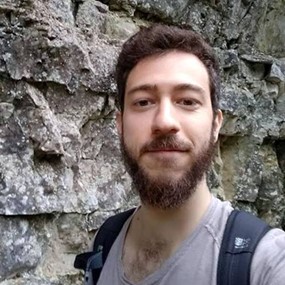 Fernando Prado Araujo is a geologist (MSc – University of São Paulo, Brazil) currently working as a Ph.D. candidate at the Department of Earth and Environmental Sciences of KU Leuven.